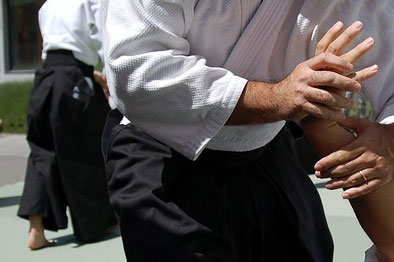 I must have been quite fortunate to be located near a famous Aikido dojo during my stay in Japan. The Aikido dojo located in Iwama, Ibaraki prefecture came to me by chance. I didn’t even know about the martial art Aikido or the about historical dojo and shrine when I landed to my high school post. It seemed like fate that I was selected to work relatively near to a world-renown martial arts dojo. As I have many awesome experiences (stories) this blog will cover just the general aspects of my experience training at the Aikikai Iwama Dojo. If you get off the train on the Joban line at Iwama station, the dojo is actually very close from Iwama station. If you know the way, a short five minute walk will take you right to the dojo. Just beware however, that right next to the Aikikai dojo is another Aikido dojo runned by Saito sensei. I honestly do not know why the training facilities are separated but from what I heard, some kind of feud between the Aikikai and Saitos occurred some time ago (probably early 2000). Both instructors of their respective organizations are top class Aikido instructors that have trained under by O-sensei himself.

What’s really cool about this particular Aikido dojo in Iwama is that the dojo is on the actual patch of land that O-sensei bought after the second world war ended. The dojo that I trained at, is the original dojo that O-sensei built and trained at. It’s old, you can smell it. Furthermore, it’s not fancy like other modern martial arts dojo so if that’s not your cup of tea, look elsewhere. The think I like about the dojo is that its original. No air conditioners and no heating systems. When its hot, its hot. When its freezing, its freezing. I remember training early in the morning on a winter day and my feet especially toes were hurting so bad, I couldn’t even walk normally after training.

There have been many improvements made to the dojo over the past years (e.g. more secure doors, sliding windows, better lighting, and shelves for our gear) as far as I know, the dojo has not gone through any serious type of renovations from the past. This dojo is the real deal and could be considered ancient compared to modern standards.

The Aikikai’s training mats can be intimidating for beginners. Compared to other dojos, the Aikikai Dojo in Iwama is unique with its unforgettable semi-hard white colored training tatami mats. Almost everyone who has come to train at Iwama has bled, sweat, and even teared on those unique tatami training mats. The mats we trained on are hard but they are not as hard as concrete. To simplify, the mats actually feel like a real tatami mat but a bit harder. Overtime, those mats start to grow on you to a point that it starts to feel good when you do an ukemis on them.

I always wondered why the mats were white. I wonder if it was to show purity and cleanliness. Maybe it was so we can easily spot blood stains. I just want to add that when someone bleeds on the mat, to remove the blood stains we usually pour hydrogen peroxide (H2O2) and watch it bubble up. I thought that was an ingenious way of removing blood stains instead of pouring chlorine bleach. 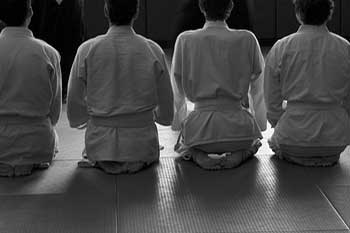 In regards to the teachers, some of them were trained directly by O-sensei himself. The rest of the senseis were either trained by a descendant or by one of the top apprentices of O-sensei. All in all, the most notable sensei I ever had in training was Isoyama Sensei, an 8th dan. He is old as but claims to be older. For example, at the time I trained, he appeared to be in the upper 60’s however he tells me he’s 85 years old. I know it’s just a joke but regardless his technique is clean and he moves quite explosive.

Furthermore I have so much respect for him because even though he is an 8th dan, he is very humble. I respect him very much because he knows how to manage people, judge people by their abilities and give people responsibilities. Most of all, however he is firm but he is also fair.

I have to add to the record that Isoyama sensei has given me a dozen rides back to the train station after keiko (training). Although the station is only a minute drive away from the dojo, it has really been an honor for me to have him drop me off at the station. These small acts of gratitude really meant a lot to me. Whenever Isoyama Sensei offers me a ride, I usually refuse out of respect but he usually counters that the train station is on the way home and that I’ll miss the train and will have to wait 30 more minutes to catch the next one (it’s a Japanese thing to politely refuse at first). As I accept and step into his small Nissan March we would always talk about all kinds of things from health to the importance of life as he drives to the station.

In one of our conversations, I recall him telling me to protect my knees and be sure to massage them every day I wake up in the morning. Doing this will help keep my knees flexible. Another time we talked about how Japan’s population is decreasing and that without children, the country will disappear.

The Other Aikido Senseis

The other senseis I had the honor of training with were Inagaki Sensei, Watahiki Sensei, Nemoto Sensei, and Kubota Sensei. Honestly there are all badasses! From what I know, the teachers don’t earn a wage teaching at the dojo as they teach as volunteers.  Each of them teach on designated days of the week. When I trained there, Inagaki taught on Mondays, Watahiki taught on Tuesdays, Nemoto on Wednesdays, Isoyama on Thursdays, and Kubota on Fridays. All held general classes at 7 in the evening, which I usually attended.

For  the uchideshis (apprentices), they trained three times a day, 7 days a week. Uchideshis trained in the morning, afternoon, and with the general classes at 7 in the evening. After training session ends at 8 pm, we would all grab a wet cloths, brooms, and dust pans and clean up the dojo. This was sometimes (it felt like always to me) followed with some drinking of nihonshu “Japanese Rice Wine” at the eating area which was in a separate building from the dojo. We would always drink, sing, talk, and eat. The main stars of the night were almost always Maeda-san and Isoyama-san (the nephew of Isoyama sensei). The spirit/ morale was always high with all who attended which is something no other dojo can beat to my opinion. Drinking after “keiko” was fun regardless of the season or weather but it was also taxing to my liver! It’s probably because of all the Japanese wine we had but I was always reminded that the socializing part is also part of martial arts training… great memories.

The Advantage of Having Different Teachers

One advantage I like about training at the Aikikai dojo is that because you have different instructors everyday, you get to learn each sensei’s style and techniques. This to me was really cool because you get to learn multiple techniques. Remember, there is not one way but many ways to execute a waza. As long as you have a strong foundation of the basics, you can add a variety of techniques to be effective.

Meeting people from around the world

All in all, the experience was great. I was able to form bonds with great people from around the world. In fact, I think I’ve met more people from different countries at the Iwama Aikido dojo than I have ever met attending university. I’ve made friends with people from Denmark, Argentina, Russia, the UK, Bulgaria, Czech Republic, France, Brazil, Myanmar, Singapore, Canada, Germany,  Australia, New Zealand, and etc. The people that come from my home country, came from places such as Minnesota, Illinois, Michigan, all places far from the west coast where I lived. It’s great to have met and create bonds with such people from around. The Aikikai dojo in Iwama was definitely an international hotspot despite being in a rural setting.

As with the Japanese practitioners, many of the students just like the foreign practitioners come from all walks of life. For example there were school teachers, doctors, lawyers, business owners, elementary school students, college professors, high school students, university students, house moms, pensioners, military special forces, firefighters, and the list  just goes on and on.

It is interesting to me that people from all kinds of backgrounds come out to Iwama to train. This to me was a socially enlightening experience. I don’t think this experience would be possible if I didn’t go out to Japan and socialize and join the Aikikai.

A word about What I Learned

I actually miss those days. Training with the Aikikai Dojo in Iwama really brought out a lot of great memories I’ve had living and working in Japan. I’ve learned a lot of wazas during my time there. However, all must remember that Aikido is a martial art. It’s something good to know and learn. Additionally, you can learn a lot about Japanese culture just by going to the dojo.

We must all remember that no matter how well you become in any martial art, one must use extreme caution and common sense when engaging in a fight. With aikido, you will learn the basics and the traditional methods that will help solidify your understanding of each waza you will learn but I must emphasize that they won’t guarantee your safety. Furthermore,  the teachers will not teach you the ” street techniques”. You will have to figure out how to implement a waza in a real fight for yourself. I need to stress that the instructors are there to primarily teach a martial art that can improve peace and harmony within society and not to provoke any violence, especially when there are options to avoid it.

Being a realist, the principles I learned with Aikido are good but in practicality won’t always work. Personally, we must always be prepared and find peaceful ways to protect ourselves and others. I think that what martial arts training (any martial art) is about.

Despite learning some crazy wazas, I can remember Isoyama sensei saying that the real master of any kind of martial art is one who can win without fighting. Oh… and the best defense are your legs; to run away.