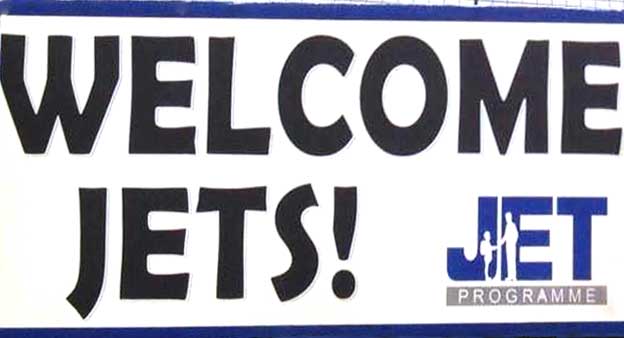 This is where all the excitement begins.

After getting my placement in Japan, I had to attend an orientation some weeks later to work on some paperwork to get 3 year instructor’s visa. Additionally, I also had to submit my final college transcripts a couple of weeks after graduation to prove that I’m a college graduate. Once this was handled, I was all clear for Japan.

I felt a bit of prestige at this point as my airplane ticket to Japan was taken care of and paid for by JET program (its part of the JET contract). I can also remember that I was designated to group B and scheduled to arrive at the beginning of August. The group A people were scheduled to arrive a week before I did. Group C, were for JET alternates and to the best of my knowledge would arrive later in April of the next year. To note: the primary reason why groups A and B would arrive in August instead of April is because the majority of JETs are U.S. based and that the American school year end in May/June. Ample time for most of the JETs to prepare for their departure. FYI: School year starts in April in Japan just like everything else in the country (fiscal year, employment, etc.)

I also received helpful information that once in Japan, I would have to go through a couple of days of orientation seminars in Tokyo at the Keio hotel. I was informed that I would be staying at the Keio hotel and  that my room arrangements would be taken care of once I arrived at the lobby.

Additionally, I received contact via email from my predecessor.  For some reason she tried really hard to sound convincing about the apartment I was going to move into. It sounded like she was trying to sell me the place. I remember her saying that my place was going to be a 2 minute walk from a train station, a 5 minute walk away from the large supermarket, and a 5 minute bike ride away from the school. Additionally, the apartment I was going to live would be a fully furnished one bedroom one living room apartment… The city I was going to be living at was suburban. The cost of the whole apartment would be 80,000 yen (around $800 USD) but the prefecture will take care half of it. All in all it all sounded really cool because the location sounded great.

I asked for pictures to be sent of the apartment but I never got them. Maybe I was asking too much? A red flag?

Other information I got included details about the school I would be teaching at and what made the school and students unique among other high schools in the prefecture. I also received the names of my supervisor and teachers within the English department of the high school. At this point, I can say that teaching at a high school in Japan sounded really awesome and the feeling of excitement was growing.

Location was my priority and I felt as long as the place I worked at wasn’t far from where I lived, it would be very convenient. Since the school was just a bike ride away, I wouldn’t have to get a car to commute. I could get a car if I wanted but having a car meant more expenses and responsibilities. If I had a car, I would have to pay for auto insurance, gas, shaken (maintenance), and even parking. I calculated that the cost of owning a car compare to not having one and figured having a car would actually cost more than the apartment I would be living in. Besides, I lived really close to the train station. For those that don’t know, the transportation system in Japan is so efficient and connected that I can go anywhere I please within the country. Location was a big thing to me and if for some reason a car was a must, the option was always open to get one. Location matters!

Stuff I had to buy and do when I arrived.

There would be some stuff that I would need to buy such as bike but the school took care of that. I would also have to set up a bank account and register as legal alien at the city hall of my city. All this is really good to know ahead of time. Nothing hard but challenging as this would be set up within a non-English environment.

As I waited for my departure date, I enjoyed myself as much as I can. I also participated in a university sponsored research summer program so I can get some certs and other experiences in preparation for grad school that I can use to apply in the future.

While waiting, I hung out with all my good friends whenever possible and studied as much Japanese I can. Hanging out with friends after graduation gave me some of the funnest memories in my life during this point because I remember doing a lot of crazy activities. At the same time though, I also felt a bit sad. Here I was going off to a foreign place, taking on an adventure, opening my mind to a new world while at the same time leaving my good friends behind. I told my friends about my feelings and they laughed it off as they usually do. They said something along the lines that I’m not going to a war zone and that I’ll be back. That was definitely true.

This may not be relevant to this post but I remember receiving some kind of formal paperwork in the mail from the Board of Education but most of it was in Japanese. The paperwork made it clear that because I would be teaching at a high school,  I wasn’t an employee with some local town’s BOE but with the prefectural government. Meaning I was a civil servant for the government of Japan. There was also a short letter included in English that instructed me to sign my name on several dotted lines. I didn’t even know what that was all about because I couldn’t read what I was signing but I was also instructed to bring the documents back with me to Japan. I wondered why I didn’t have to mail it back right on the spot? It didn’t make any sense to send paperwork all the way from Japan in Japanese so that I would have to bring it back in person. I really thought that it would be better to have them hold it and deal with it when I got there. I didn’t sign anything because I don’t sign anything I don’t understand. Was this a test of my ability to follow instructions?

Finally, many of you reading this might wonder what I brought to Japan. I always packed light. I don’t bring anything that will weigh me down. I brought what I needed and my list will seem similar to person going on a short vacation.

*For credit cards, VISA helped me out the most. Although I didn’t want to use my VISA because there was a foreign transaction fee for every purchase, not many places where I lived accepted AMEX. Furthermore, I used my VISA just for a couple of weeks until I was able to get a Japan based credit card from a bank which held my salary.