Why the two types of plates?

Taxes. Light vehicles are yellow plated and owners pay less in taxes while regular vehicles have white license plates in which owners pay more in taxes.

The Yellow License Plates (or the Light Cars)

These cars are also known as kei-cars (mini cars) with a small engine size of 660 cc and under. They do no have as much power as the normal sized white license plate cars and they are also very rare to see in countries such as the United States (probably due to their poor safety standards). They are also very tempting to buy because of the comparably cheaper price and due to the cheaper expenses ( less gas and less taxes).

With safety concerns aside, yellow plate cars are the preferred choice among the struggling middle class because they are so much cheaper and affordable to own than white license plate cars.

Yellow plate cars are mainly used to go around town or to go to work not far away.

Additionally, it has also been reported by many that yellow plate cars are also great to drive where there are a lot more narrow roads because they are smaller and unassumingly easier to maneuver in tight places.

Likewise, since these cars are small and lightweight they they are not as safe, compared to a typical white plated car.

If you get into a major car accident, the chances of getting seriously hurt or killed is high because driving in a kei car really feels like driving a tin can on wheels. Many light cars crumble like paper.

Here’s a screenshot of a news article involving a light car, which 2 died. 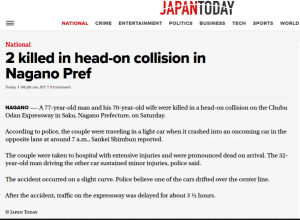 Personally, these cars are scary to drive especially on narrow 2-way roads. Not worth the bargain.

The safety on kei cars is evolving due to stricter safety regulations in Japan. These safety regulations are being imposed after some lawmaker noticed a series of fatal car-to-car accidents involved a majority of yellow plate cars, but I’m not holding my breath and risk my family and my life.

Check out this side impact test… a real passenger would die of a broken neck!

With safety concerns aside, yellow plate cars are the preferred choice among the struggling middle class because they are so much cheaper and affordable to own than white license plate cars.

These are the normal cars or the regular type of cars that are common around the world.

In general, cars with white license plates have a standard engine size (displacement) of more than 660 cc. Furthermore, these cars are a lot more safer and lot more comfortable compared to yellow license plate cars.

White plate cars are the types of cars I would refer to as normal cars you would see in most countries esp. in the US.

The only major drawback with white plated cars is that they are expensive as they cost a lot more to maintain and carry a higher burden when it comes automobile taxes*. However, this is the kind of car I would drive no matter the cost all because of safety.

Personally, these type of cars feel safe right to drive.

The Big Deal About Yellow and White License Plate Cars

From a global perspective it would seem strange why Japan would make two categories for cars. But because Japan is a high taxing country; you not only pay tax when you buy a car, you will continually have to pay taxes every year depending on the size and weight of the car. The Japanese automobile tax system plays a very large role in influencing people who can’t afford normal cars to buy yellow plate cars as lighter cars cost less in taxes.

Therefore even if people want to own a white license plate car, owning one is not always a feasible economic option.

*Every registered driver must pay automobile taxes every year.